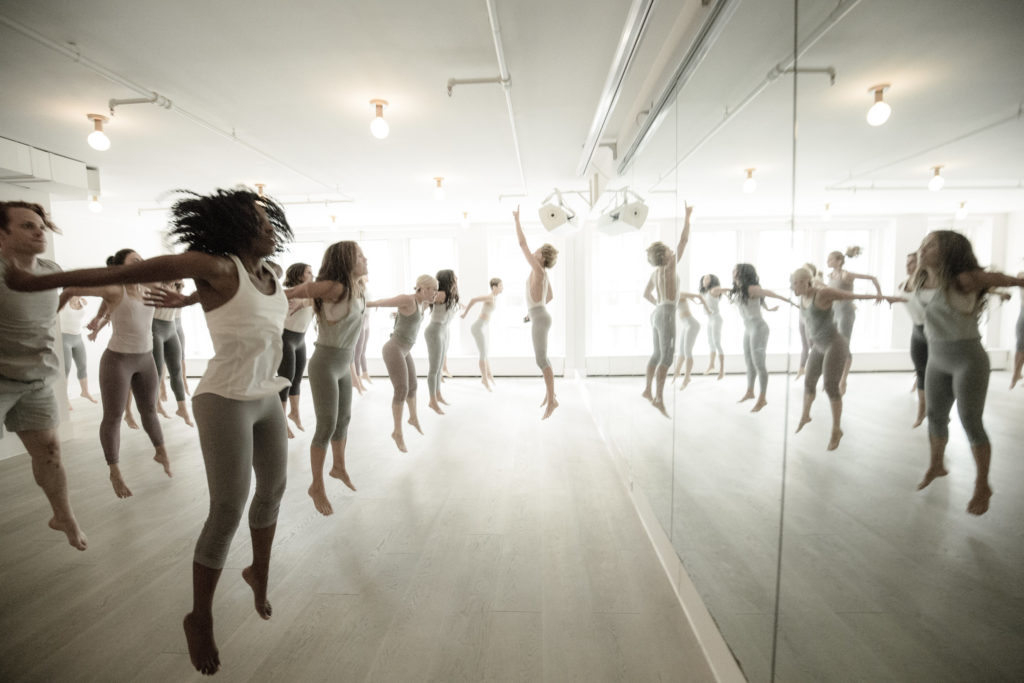 My out of office is on for I’m having a much-needed vacay. However, since arriving I’ve been managing a major case of FOMO in which I’ve fall-en (pun intended) victim to not getting much sleep in the city that never sleeps.

Amidst the chaos, randomness and anything goes energy that makes NYC incomparable to any place in the world, on the weekend I did my second ever The Class by Taryn Toomey (my first was in LA in 2017).

I loved it on so many levels and for so many reasons that I felt the need to write about it (hiya from the plane leaving JFK).

First, this particular class was a collab between The Class x Live Drumming held at alo yoga. (One of my nicknames is A-Lo so hello synchronicity). And for those of you who have read my e-books, you’ll know I’m all for collaboration, and advocate it’s an essential element of shaping a progressive future of the law.

I had recently posted on @legallyinnovative about my morning ritual of “shaking it off”, The Class takes this notion to a whole other level.

Did someone say transformation?

Speaking of which, Taryn was a long time sales executive at Ralph Lauren and Christian Dior before she hung up her designer clad wardrobe to create a unique movement out of the basement of her Tribeca apartment, because she wanted to be more heart led in her life. She’s another girl crush of mine, and I’m hoping one day the stars will align for me to actually take a class with the brains, beauty and mindset behind The Class. (Hi Taryn if you’re reading this by any crazy chance).

To use TT’s words – Through simple, repetitive calisthenics and plyometrics, participants challenge the body to engage the mind. With guided instruction and powerful music, The Class invites students to witness their resistance to discomfort. The result is an expansive, heart-clearing and body-strengthening release. This Class will challenge and enlighten you all while building an incredibly strong, lean, resilient body. You will learn tools to empower your life.

In a room with 50 others (all per chance women, so could we feel any more empowered?!), I laughed, cried, sang, danced, and shouted “Ha” primally along with everyone else at the top of many burpees.

Not long in, there was definitely more sweat than sparkle happening, but I left feeling what I would like to describe as shiny (read, drenched a la Bikram yoga style) and exhilarated. High on life in fact. It’s like I unlocked a bit more of the part of the brain that releases endorphins. In other woo woo words, it resonated with my soles as well as my soul.

The first sections of my e-Book Legally Innovative, are about how to transform one’s mindset – adopting a consistent practice of rewiring of one’s brain. For us lawyers, there’s an extra deep idiosyncratic auto pilot cycle to cut through, because we are so in our heads.

Emerging neuroscience backs all of that up, and lately I’ve found myself reacquainting myself with the work of Dr Joe Dispenza (whose own story is incredible if you’re not already familiar with it), and other neuroscientists.

Throughout The Class, I could draw many connections between the carefully placed affirmations and invitations to check in, by the goddess like Jaycee Gossett with the skills required to be innovative. These included to stop waiting and to start now, to acknowledge that discomfort is only temporary, that to be challenged is actually living one’s best life, and to say a deep thank you for having the capacity to be anything you want to be. With our eyes closed, we can combat our fear driven limiting beliefs and rewrite them.

If thunder only happens when it’s raining (see my Insta highlights under Kool Stuff for context), innovation only happens if you, me, we put our minds to it. It too can be a raw and ritualistic exercise, with uneasy transitions and frustrating moments. The point is not to give up, but to give in, and keep going.

The verdict is in. The Class was “fyre” (a new descriptor I learned from an inspiring Aussie entrepreneur with whom I had dinner in NYC). I can’t wait to do another.

This is not a sponsored post. Photo credit from The Class.

I’m on a mission to inspire others to “do law” differently, with a progressive and innovative mindset. Learn more about unlocking your legal innovation potential and all things transformation in my e-Books Legally Innovative & The New Age Lawyers.